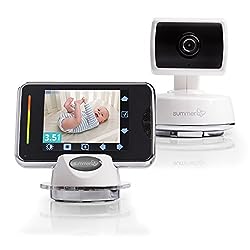 Having a monitor can be one of the items that can put a parents mind to rest when going to sleep at night, especially when your little one is in their own room. For the first few months our daughter slept right next to our bed, so the anxiety of moving her to her own room ran high. However, having a monitor made things much easier to adjust to. Summer Infant makes a variety of easy to use monitors that will work in any price range as well as monitoring needs. Have multiple cameras, a touchscreen or even a microphone to lull your baby to sleep from another room. Below we review the Summer Infant 5″ screen monitor. This Summer Infant Monitor was very appealing for a few reasons, the monitor was a nice large 5″ screen that really allowed you to see your little one, as well as a zoom button and even allows you to move the monitor around to get a full view of the room. There is also an adjustable volume for the sound to be nothing all the way to very loud, literally you could probably hear a pin drop when it’s adjusted to the full volume. This monitor also allows you to hook up multiple cameras to it which would be very handy for multiple children. It also has a temperature gauge that indicates the current room temperature. I have found this monitor to work very well and all the versatility in operating it have been more than convenient.

The only function I haven’t really used yet is the microphone option that allows you to speak into the screen part and it will be heard through the camera piece. I only have a few minor issues with this monitor. One is the battery life, the battery life when using the video and sound monitor is limited, if you leave the video portion off and just use the sound it greatly increases the life of the battery. I typically will only hit the video view here and there to see what’s going on, but if for some reason I do have it on longer it drains the battery fast. I usually leave it plugged in while I’m sleeping, so I don’t have it running on battery alone for very long. Also, the distance of how far the signal goes is sometimes spotty. We live in an older house that has plastered walls and sometimes that is more of a barrier for signals, such as wifi, so it doesn’t surprise me that the monitor would sometimes have difficulties getting a signal at certain distances too. The only thing I would change about this monitor is having a bluetooth feature as well, having the ability to sync the camera to my phone would be priceless.

This monitor you will find for anywhere between $125 to $150 depending on where you purchase it from. It actually has gone down in price about $50 since I purchased it about 10 months ago. For this particular model, I would say that this price it is currently a much better value then the $200 I spent on it. The Summer Infant monitors are constantly being updated and revamped so there are new models coming out all the time, kind of like cell phones. Sometimes the latest models have relevant changes, and other times not. Regardless, Summer Infant makes a great line of monitors. The Summer Infant monitor works well and has been reliable and functions well. The screen is large and clear and has plenty of valuable features that enhance its function. The price makes itaffordable and competitive.

Still looking for some more information? Please contact us and we would be happy to help you!